KING5.com would like to send you push notifications about the latest news and weather.

Notifications can be turned off anytime in the browser settings. 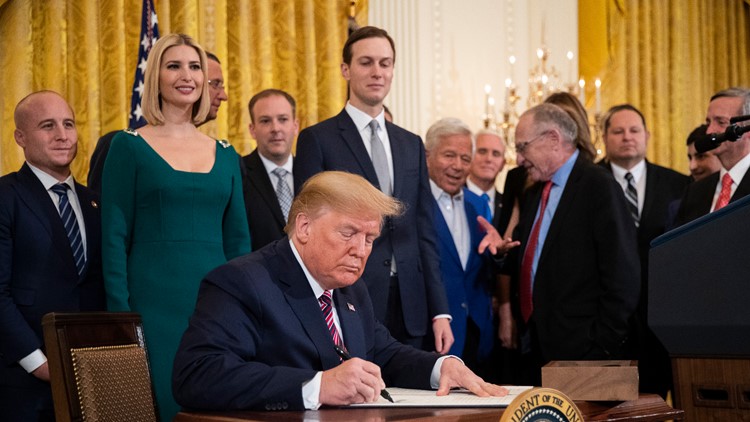 Photo by: AP
President Donald Trump signs an executive order combatting anti-Semitism in the U. S. during a Hanukkah reception in the East Room of the White House Wednesday, Dec. 11, 2019, in Washington. (AP Photo/Manuel Balce Ceneta)

WASHINGTON — President Donald Trump signed an executive order Wednesday targeting anti-Semitism on college campuses. As NBC News reports, the order would also allow the government to interpret Judaism as both a race or a nationality, and also as a religion under federal law. This would allow the Department of Education to directly take action against what the Trump administration views as its interpretation of anti-Semitism on campuses.

Officials are calling this order a tool to broaden the federal government's definition of anti-Semitism. As the Associated Press reports, Trump has been accused of trafficking in anti-Semitic tropes, and has in the past made comments about Jewish people and money. Trump, though, has also consistently made it clear in public that he strongly supports the state of Israel. Trump moved the U.S. embassy from Tel Aviv to Jerusalem and has taken a hard line approach against Iran.

Read the official text of the White House controversial executive order on anti-antisemitism:

NBC reports that the interpretation would permit the Department of Education to hold back funding from university or educational programs if the department believes campuses are discriminating in an anti-Semitic way.